6 budget-friendly tips for setting up a PC gaming room As exciting as it is when you get to set up your own dedicated PC gaming room, it’s easy to get overwhelmed with the number of options available, or to get carried away with all the shiny new gaming gear available in the market.

If you’re working with a limited budget, here are some things you might want to prioritise for a gaming room that looks good and serves you well.

Your back will thank you

Gaming chairs aren’t exactly cheap but it’s one place you should definitely consider investing in. You should know your gaming habits best. I know that in the excitement after the launch of a new game or DLC, I can easily spend over 12 hours a day sitting in front of my PC. That’s a lot of strain on one’s body, especially when you’re getting older.

A proper gaming chair is designed to be comfortable and ergonomic. In other words, they’re supposed to provide good support for your back and shoulders and encourage good posture.

To do this, a gaming chair usually has a much higher backrest and more lumbar support for your spine. They are usually also more adjustable, allowing you to do things like tilt the backrest at a 165-degree or adjust the positioning of the arm rests.

And while a gaming chair won’t save you from the eventual exhaustion of staring at your screen for long hours, your back will thank you for that added support and comfort.

A PC produces a lot of heat so it’s important to consider the ventilation and air flow of the room you’re going to be spending a lot of time gaming in. This isn’t just a case of you being comfortable, it’s about keeping your equipment from being damaged from excess heat build-up as well.

Ideally your gaming room should be air-conditioned, with enough space around your PC so the air can circulate. Minimise any clutter or obstructions around your PC, especially near its fans. Every now and then it’s also a good idea to clear any dust, pet hair or debris around your PC’s vents that may be obstructing its flow of air. A sexy gaming room is also a clean gaming room.

The heart of your machine

If you’re wondering whether you should be upgrading your PC or investing in a new machine, it really depends on what games you’re planning to play on it, and the level of graphics performance you’re expecting. 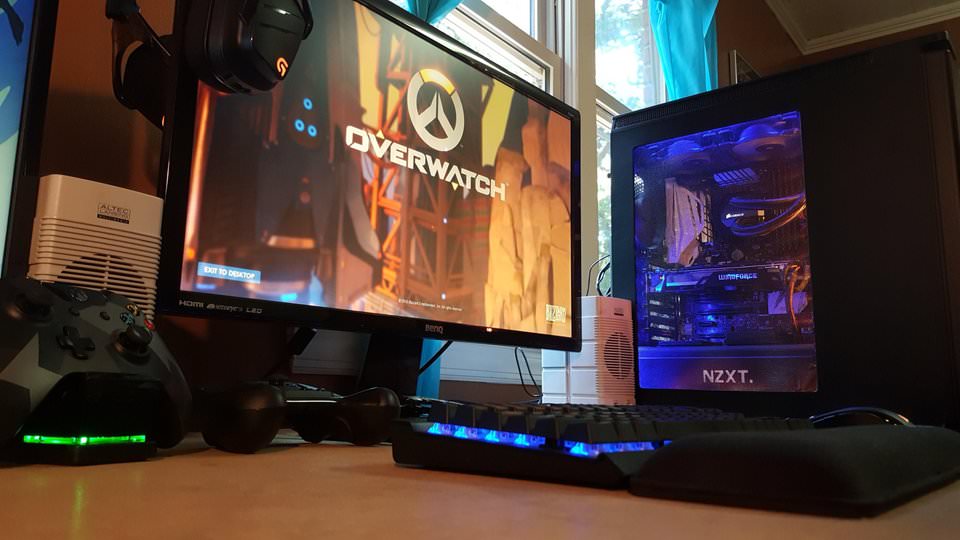 Games like Overwatch aren’t too graphics-intensive, so you could get away with a low or mid-tier graphic card (image credit: reddit u/kickbuttireland)

The best way is to look up the recommended specs of the games you’re planning to play and see how your current PC compares. On Windows 10, you can easily check your PC’s specs under Settings > System > About.

Your graphics card or Graphics Processing Unit (GPU) should be the key thing you should save up for if you’re looking for 4K graphics or 144Hz performance, followed by your computer’s CPU. 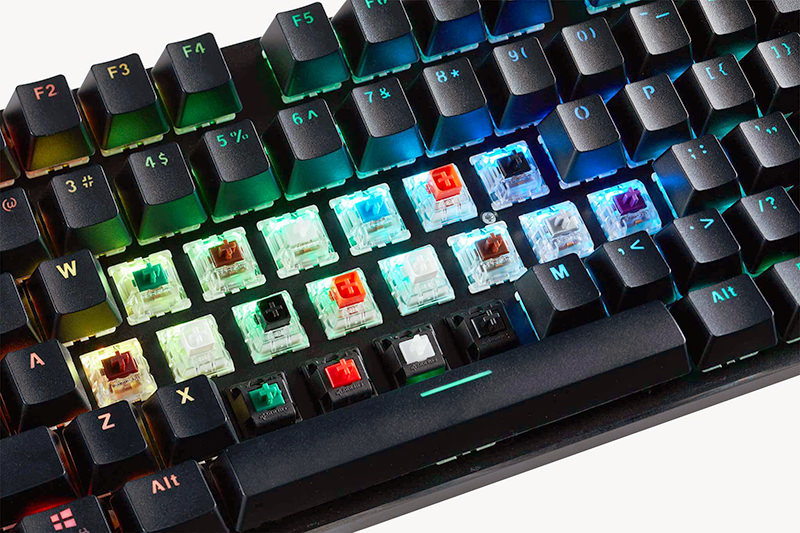 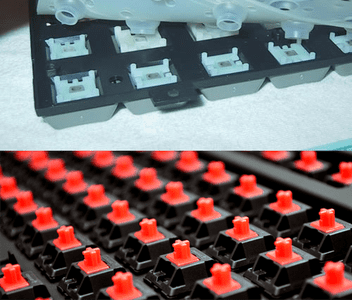 Membrane or rubber dome keys (above) and mechanical keys (below)

Keyboards with RGB backlighting look cool and all but what you should really be focusing on is the what kind of keys you’re using.

While different gamers will have their personal preferences, many gamers (myself included) find that a mechanical keyboard offers a better gaming experience compared to a traditional rubber dome membrane keyboard.

Why? For starters, mechanical keyboards generally provide greater levels of tactile feedback, translating to faster and more accurate typing. Due to the way a mechanical key switch works, you feel a satisfying bump that tells you when you’ve pressed a key – or in some cases, an audible click.

Additionally, mechanical keyboards have a diode on each of their keys, something not possible for rubber dome keyboards. This allows for mechanical keyboards to have a higher rollover i.e. they can more easily recognise simultaneous key presses at the same time – vital for games with elaborate keyboard combos.

Thankfully getting a mechanical keyboard today won’t blow a hole in your wallet. If you don’t care about macro keys, customisable RGB lighting or brand names, you could get one for SGD 50 or less. The eye of the beholder

When it comes to gaming monitors, bigger doesn’t necessarily mean better. Apart from screen size, there are many other features you may value more based on your personal preferences.

For example, when it comes to your gaming visuals do you prefer 4K ultra HD resolution graphics with High Dynamic Range (HDR) or do you want a higher screen refresh rate and low response time?

A refresh rate basically refers to the how often a display refreshes its image. The higher the rate, the more frames are available for us to see in a second, reducing perceived blur. Some gamers find the difference between a 60Hz and 120Hz display really noticeable while others can barely tell. The higher a monitor’s refresh rate, generally the lower its input lag i.e. how responsive the game is visually to your input.

Assuming you don’t have an unlimited budget to pick the highest-end gaming monitor with all these features, you’d want to prioritise certain features over others.

If you generally play single player games or simply want to savour the best graphics your computer can deliver, you’d probably prefer a monitor that does 4K and HDR.

If online competitive or multiplayer games are more of your thing, you’d probably prefer a monitor with a higher-than-average refresh rate of 120Hz or 144Hz. There are monitors that even go up to 240Hz.

The fast and the furious

Even if you’re mostly focused on single-player games, you’ll still going to need a fast and reliable internet connection. If you haven’t made the switch yet, 1Gbps fibre broadband plans are now more affordable than ever in Singapore – great for downloading large game files and game patches.

But speed isn’t the only factor to look out for when choosing a broadband plan for gaming. Latency refers to the time it takes for one packet of data to move from one designed point to another. In the context of online gaming it’s the time between you sending a request to the game server e.g. fire my weapon when you press left-click on your mouse, to the game responding i.e. the weapon firing. 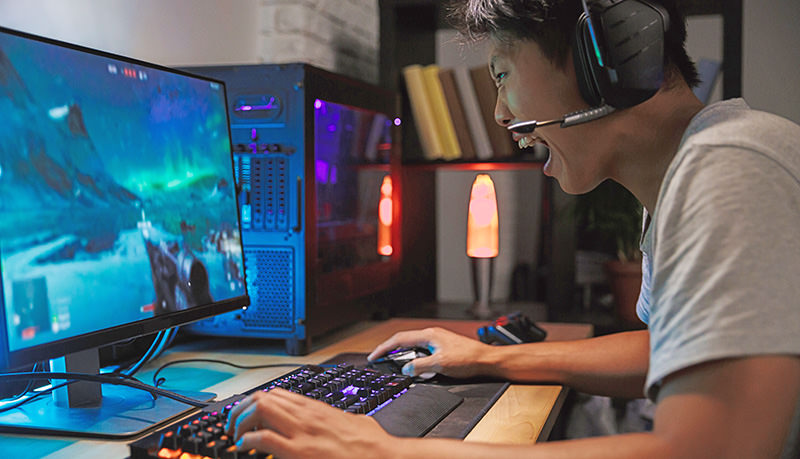 As you can imagine, low latency is crucial for your online gaming experience. High latency – better known as lag – causes games to be unplayable. Generally the closer a gaming server is to your location physically, the lower latency you get – which is why it’s usually a good idea to pick game servers located in your region. The data you transmit takes time to reach its destination and even half a second second can make a difference.

Certain fibre broadband plans like MyRepublic GAMER are optimised from a network level to provide lower latency to popular game servers. MyRepublic GAMER routes the data of GAMER users to the game servers via the shortest possible path – a service termed Custom Routing. 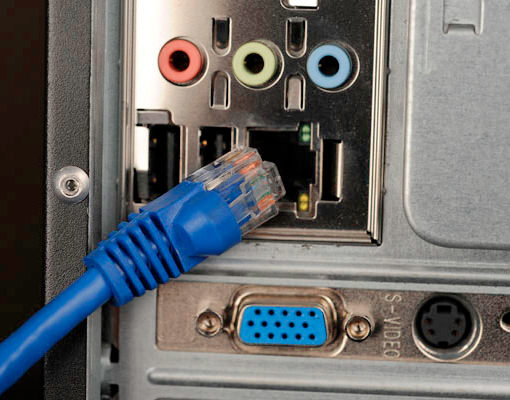 Seriously, if you want the best internet speeds for gaming, use an Ethernet cable

Additionally, if you’re a serious gamer and want the fastest speeds and lowest latency for your online gaming, it’s highly recommended that you connect your PC directly to your router using an Ethernet cable. A WiFi connection cannot compare to a direct cable solution in terms of reliability and speed.