Online Games to Play Together Part 1: Worlds to Escape Into 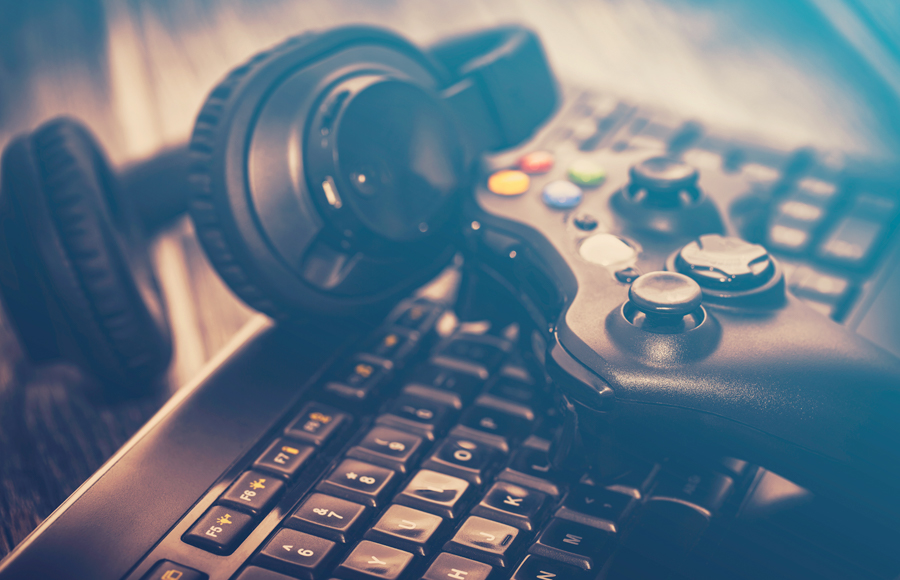 While the Circuit Breaker may be over, it doesn’t mean we should all jump back to our regular social dates and group hangouts. Staying home as much as we can is still the best way to keep ourselves safe during this time of COVID-19. What’s a person to do when they’re craving human interaction but shouldn’t meet people face-to-face? Meet online of course!

But why limit ourselves to Zoom or Skype chit-chat calls? In the digital space, you could be building and showing off a beautiful island home to your friends or working together to build a glorious base on an alien planet.

If you’re looking to have fun with your friends online in a world that’s full of things to do and see, here are some games we would recommend. 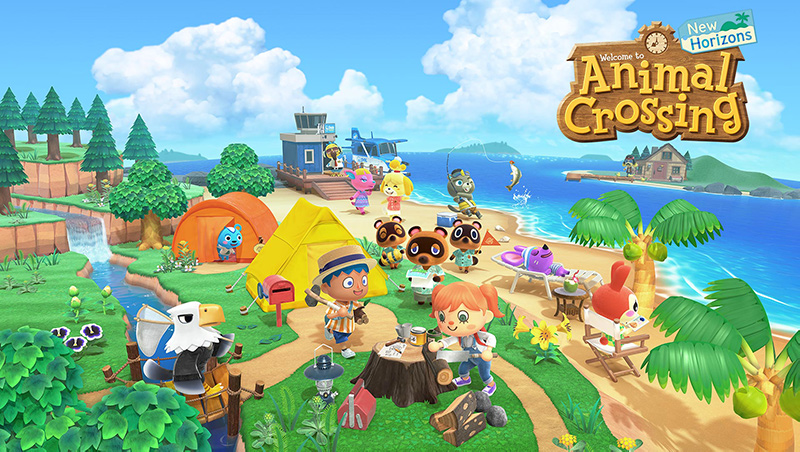 Charming and cheerful isn’t it?

If you haven’t noticed already, everyone is playing Animal Crossing: New Horizons on the Nintendo Switch. Well okay not literally everyone but a lot of people sure are, even months after the game released in March.

The game holds the current record for fastest sales among all Switch games, with 13.41 million copies sold within six weeks after release. This charming life simulator could not have picked a better time to come out given how many of us were and are looking to escape the stress and isolation of a COVID-19 world.

The premise of Animal Crossing: New Horizons is simple: you (with your own customisable in-game avatar) have your own virtual tropical island and get to design and grow your own village, right down to crafting the kind of furniture you want in your house and the pieces of clothing your avatar wears.

While there are resources to gather and tasks to do (such as fishing, picking fruit, catching bugs or chopping trees) everything generally has a wholesome, chill “do what you want” vibe. Even the fellow villagers you’ll meet – talking animal characters – chat about friendship and finding peace and quiet in this little community. 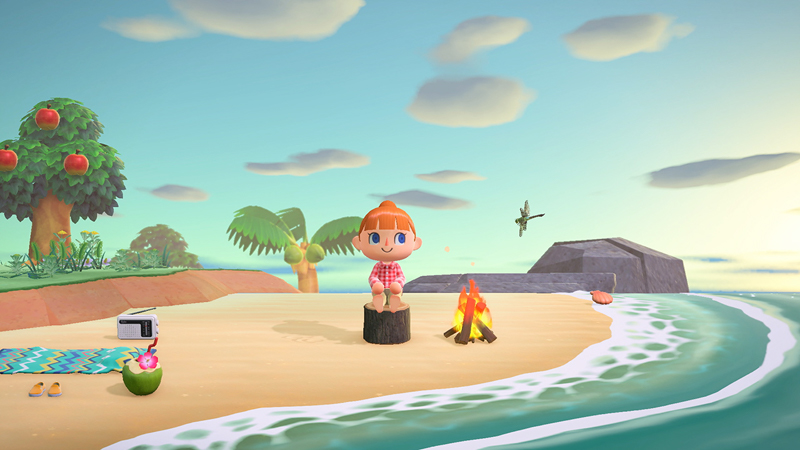 The game’s tropical island setting adds to its chill vibe

Beyond its depth of customisation and the satisfaction of building your idyllic island paradise, people keep playing Animal Crossing: New Horizons because of its multiplayer aspect: you get to visit each other’s islands and do all sorts of activities together.

You don’t just get to give your friends a tour of the amazing home and island you’ve decorated, you can trade crafting recipes and items and they can shop at your island’s stores. Many players have even gone a step further to create their own in-game activities ranging from fishing and bug-catching tournaments to mini-games of hide-and-seek and musical chairs.

One Singaporean couple even held their own virtual wedding in Animal Crossing: New Horizons. What kind of farm would you build?

Can’t get a Switch to jump on board the Animal Crossing bandwagon but intrigued by the idea of designing and building your custom settlement on a virtual plot of land? There’s the ever-popular indie game Stardew Valley, available on all platforms including PC, PS4 and Xbox, even mobile ones such as iOS and Android.

In Stardew Valley you are tasked with rebuilding your grandfather’s farm from scratch. You begin with a patch of land set in the middle of a small but lively rural town filled with (this time human) villagers. By caring for and growing your farm home, you also help revitalise the greater community. 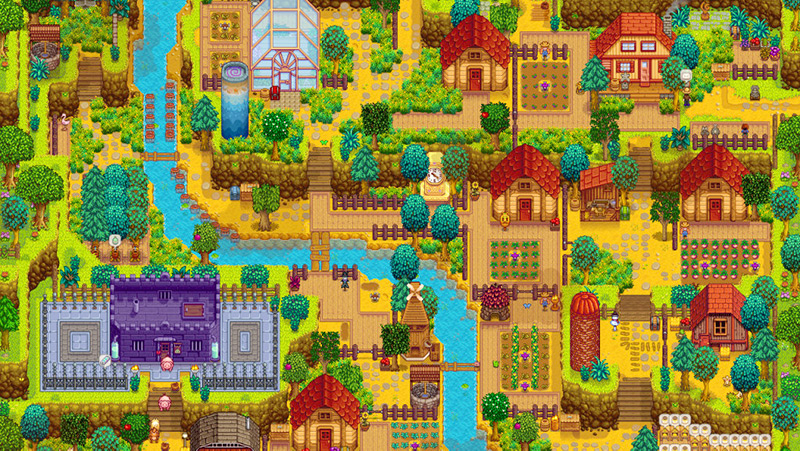 The surrounding town and community play a big part of the game too!

There are regular tasks to do: there’s land to clear, crops to plant and tend to, different kinds of livestock to rear – even monster-infested mines to explore and gather minerals from. Like other simulation games, doing all these chores may seem dull and tedious, but the experience is far from it.

Like your character in the game (who starts out as a corporate drone in the city) you’re offered an escape into a more simple life with the freedom to progress at your own pace. You decide how to organise your farm, what plants to cultivate, quests to do, what villagers to visit and form relationships with (you can even marry them!). 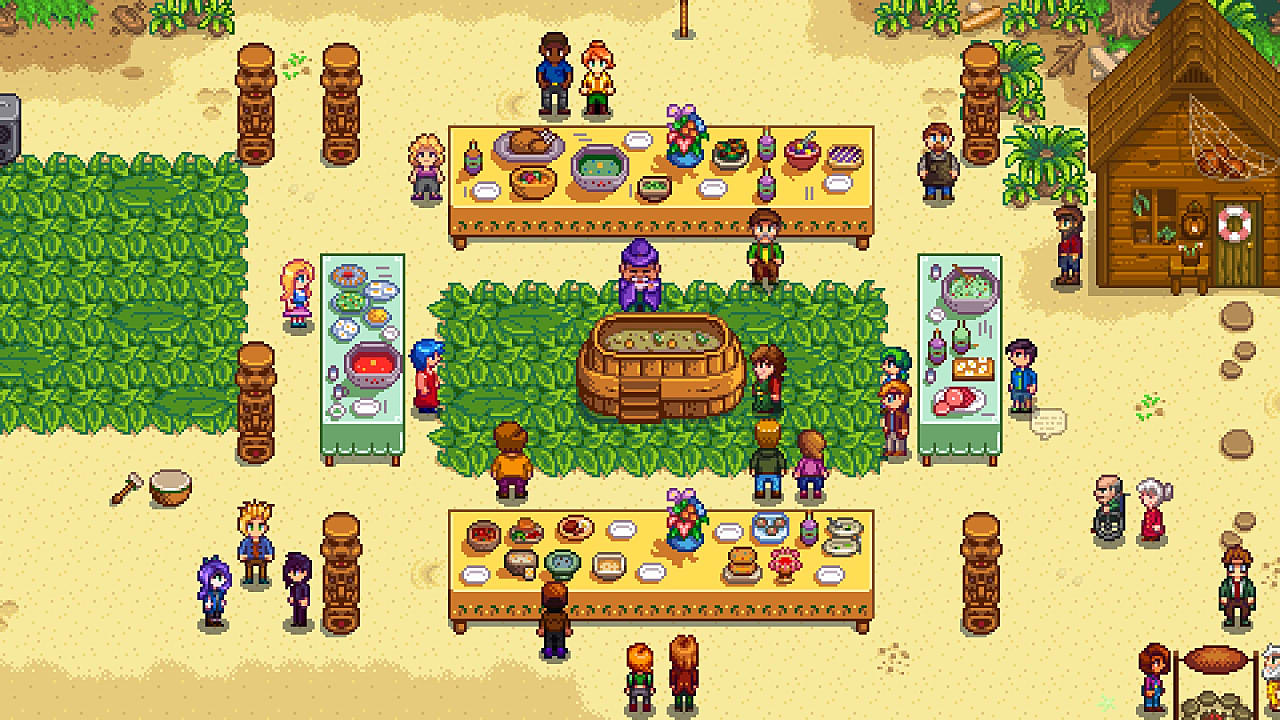 And with its multiplayer feature, you and your friends can work together to build a farm and community that you all share and own. Whether you want to slowly build the ideal farm system together or speedrun through the game as a group, Stardew Valley promises to be a fun and satisfying journey together. 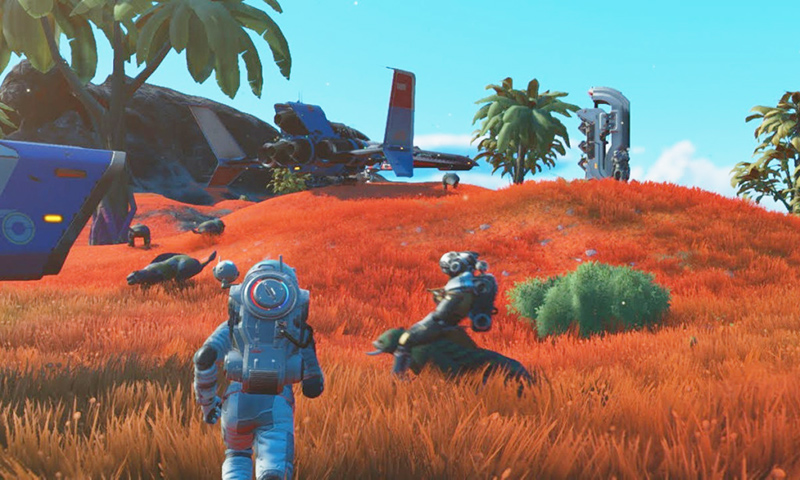 There’s a whole galaxy for you to explore… once you get your ship fixed.

If you last heard about No Man’s Sky from its a disastrous launch few years ago and never gave it a try, good news: today’s No Man’s Sky is vastly improved from where it was 4 years ago, to the point of being hailed as the comeback story of this gaming generation.

If you find farm life too dull and mundane, No Man’s Sky takes you on a journey to the stars and beyond. You start off on a lonely alien planet with a mess of broken equipment and it’s up to you to gather the necessary resources, craft items and somehow put together a working ship to rocket off into space and explore an seemingly infinite procedurally generated galaxy.

To infinity and beyond! (GIF by The New Yorker)

Like the other games we’ve mentioned here, there is no fixed goal in No Man’s Sky. While there is a storyline you can pursue, you are free to do what you want in this sci-fi universe: maybe you want to travel far and discover strange new planets, or maybe you want to build a fancy base on a beautiful world you found. 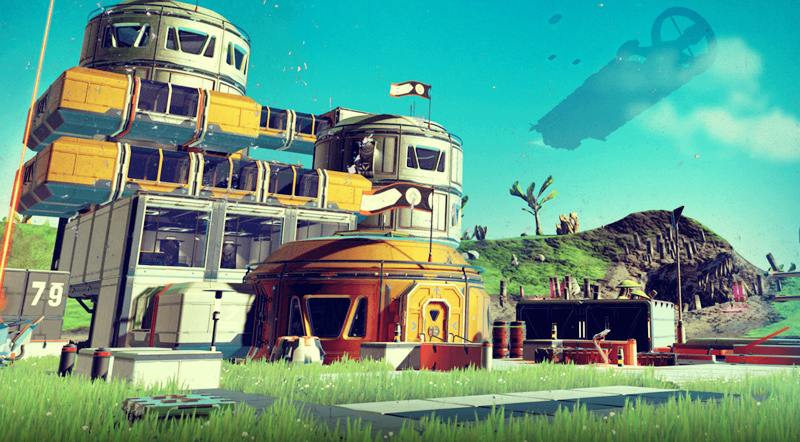 There are some fancy bases you can build…

You can even seek out and build for combat: there are spaceship battles you can engage in, enemies to shoot, even a giant mech suit you can pilot and fight in. 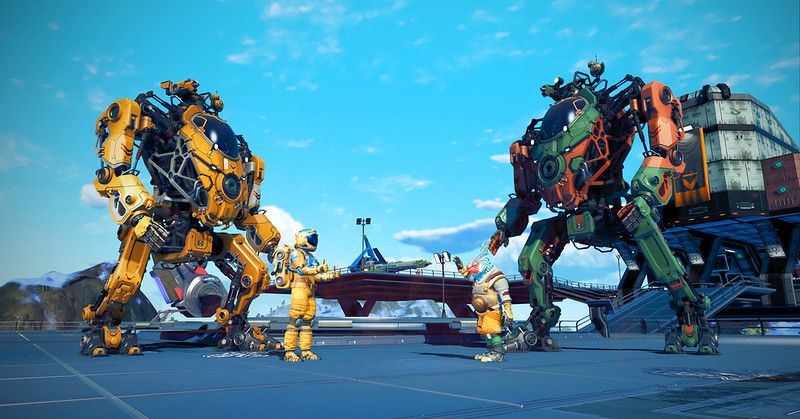 Yes there are mechs in this game.

While the galaxy is huge in No Man’s Sky, it does take work to get to where you want to go: you will spend a fair bit of time hunting down and trading the minerals you need as well as manage limited inventory space. These activities that can get tedious–there’s a reason we call it grinding– which is why it’s great you can play No Man’s Sky with your friends (a feature that was sorely lacking at launch). 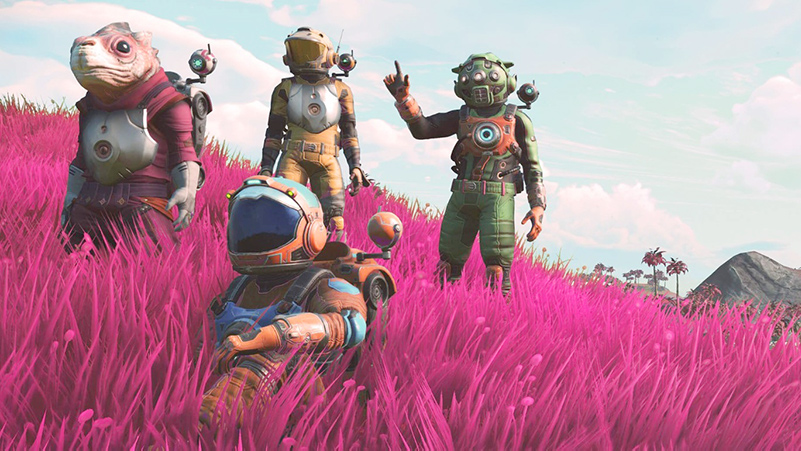 Chill with your friends on an alien world.

Today, No Man’s Sky players can meet up on The Nexus (a space station social hub) to show off their spacesuits, quick travel to each other’s home base and ships, trade resources, go on missions or just get into trouble together. 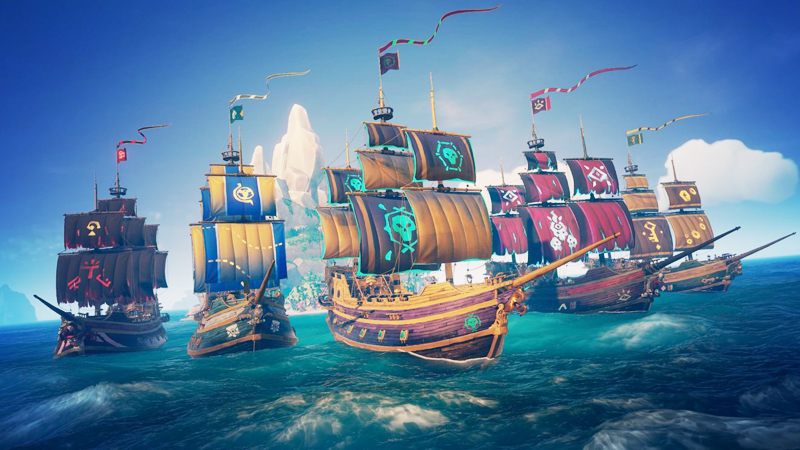 It’s a pirate fantasy game, with emphasis on the fantasy.

As satisfying as it may be to some, maybe you don’t want to run virtual errands (or feel like you’re running them) when you’re hanging out with your friends online. For a more action-packed rules-light world to get lost in, there’s the colourful pirate fantasy game Sea of Thieves.

Available on PC and Xbox, the premise of Sea of Thieves is pretty straightforward: you’re a pirate with a ship, our friends are your fellow crew, and you’re here to sail the high seas, fight and loot treasure. And yes, there is even a monstrous kraken that you can fight (or try to). 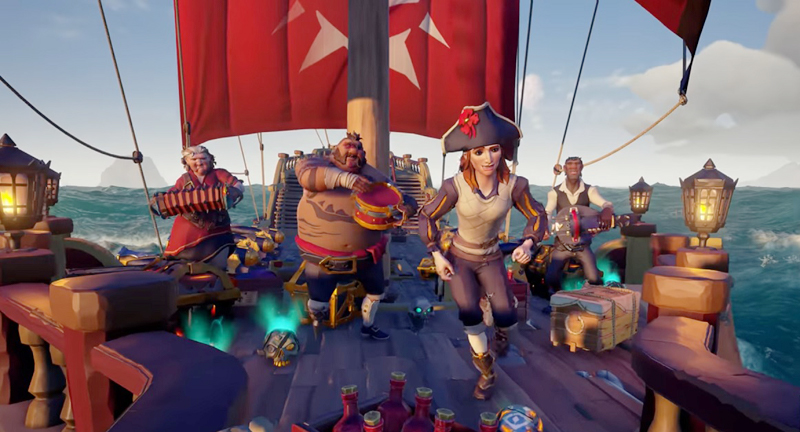 Arrr, is it a pirate’s life for thee?

And since it is a pirate fantasy, ship versus ship combat encounters in the open shared world with other players are an inevitable part of the game, made especially memorable with the use of a Speaking Trumpet, a horn feature allowing players to project their voice across the waves and to other ships, sometimes to hilarious effect.

If you’re doing to get something accomplished, there’s plenty of stuff to do, from faction quests (that range from capturing pigs to defeating animated skeletons to finding buried treasure) to multi-step Voyages to story-driven Tall Tales. Your progression, in terms of gold and reputation earned, are all towards unlocking cosmetics for your pirate character and ship. 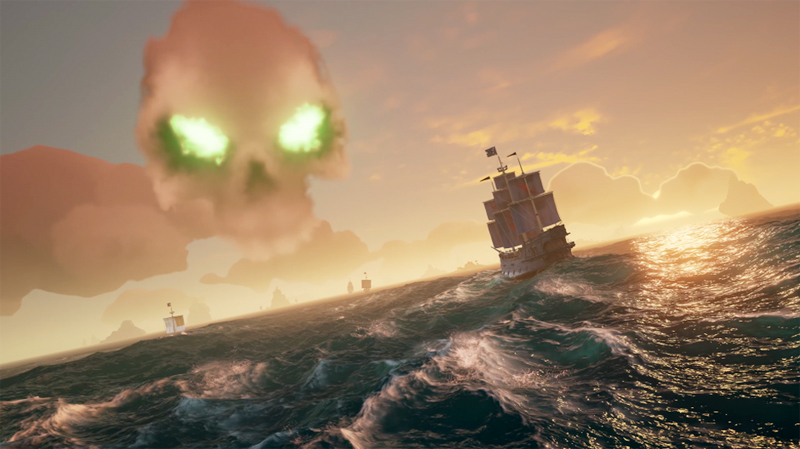 Danger on the horizon!

At its heart, Sea of Thieves is a fun sandbox, a swashbuckling playground for adventures players make for themselves. Even sailing the ship itself is a social experience: you and your friends will need to communicate and work together to steer it, managing the sails and hull integrity (and cannons when the need arises).

GIF by The Tech Revolutionist 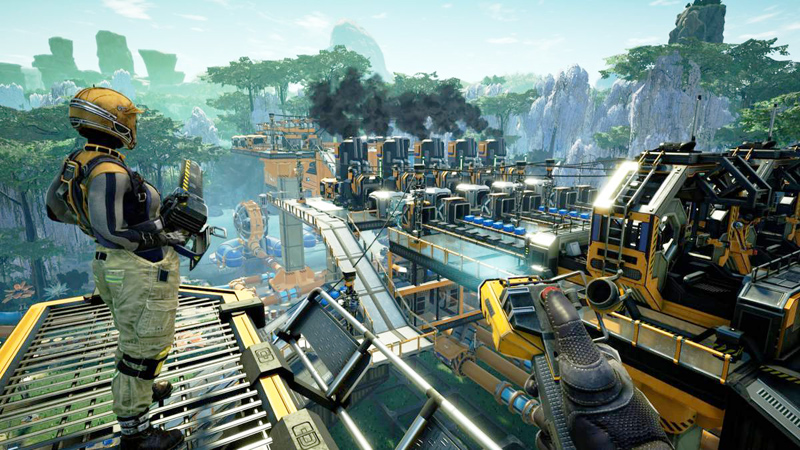 Putting the factory into Satisfactory.

If you love building things, and building things to build things, there’s Satisfactory, a new open-world factory building game available on PC. While it’s currently still in Early Access, there’s already lots to do and enjoy about the game.

As a faceless engineer for a galactic corporation stuck on an alien planet your goal in Satisfactory is to conquer nature, harvest resources and build factories across the land, expanding however you want. With co-op, you can share the joys (and challenges) of doing this with up to 3 other friends.

Automation is the name of the game in Satisfactory. Unlike other building or farming sims, you’re not expected to do the same task over and over, like going out to water plants or chop wood every day. It’s up to you to build the right machines so your factory can do it for you, and to upgrade your tech so you can build better and more effective machines. 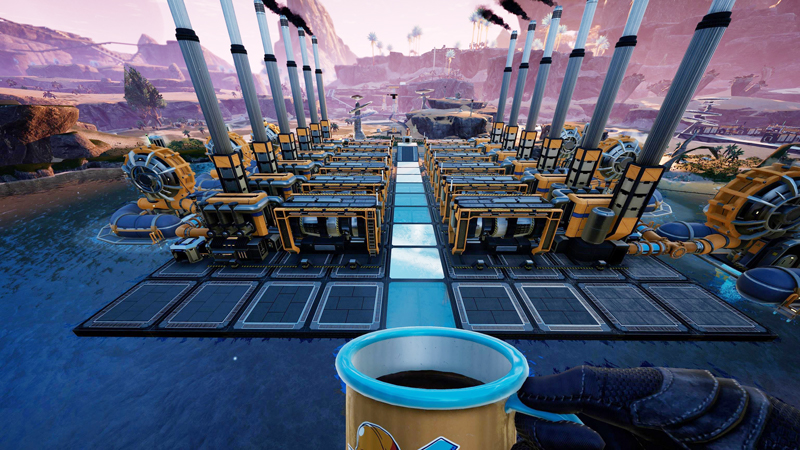 Conquer the planet one beautifully organised factory at a time.

Need to transport coal to your power generator? Build a long conveyor belt to bring it to you. Need to mine ore? Make a mining rig. Need more storage? Build storage units. Need to craft an iron rod? There’s a machine for that too.

Why mine ore yourself when you can automate it! (GIF by PC Gamer)

What also helps set Satisfactory apart is its exploration aspect: you’re encouraged to seek out machine upgrades and scarce minerals located out in the wide open world, a world filled with beautiful and sometimes hostile alien creatures and plants. Not to worry, you can come back and bulldoze that patch of jungle down later.

Not an environmentally friendly game.

Yes, you have the freedom and space to build a new base anywhere, connecting your factories across the planet with power cables, roads or even fast-travel pneumatic tubes. Perhaps one day you’ll combine and organise all of them into one ultimate megafactory. 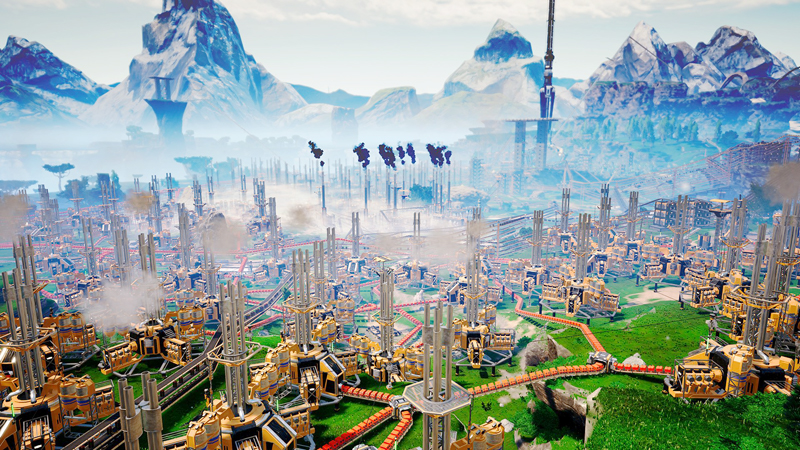 That’s… a lot of power. (Credit to u/Fyshokid)