Should eSports Have a Place in The Olympic Games?

US $1.08 Billion… Sheesh, that’s a lot of money. If you were told ten years ago that this is how much the eSports industry is currently valued, your jaw would most likely drop in disbelief. The growth of eSports has been astronomical in the last decade with popular games such as League of Legends hosting global and regional tournaments. The world’s best players bumping heads with the aim of winning amazingly huge prize pools, there’s no wonder eSports attracts millions of viewers every year! 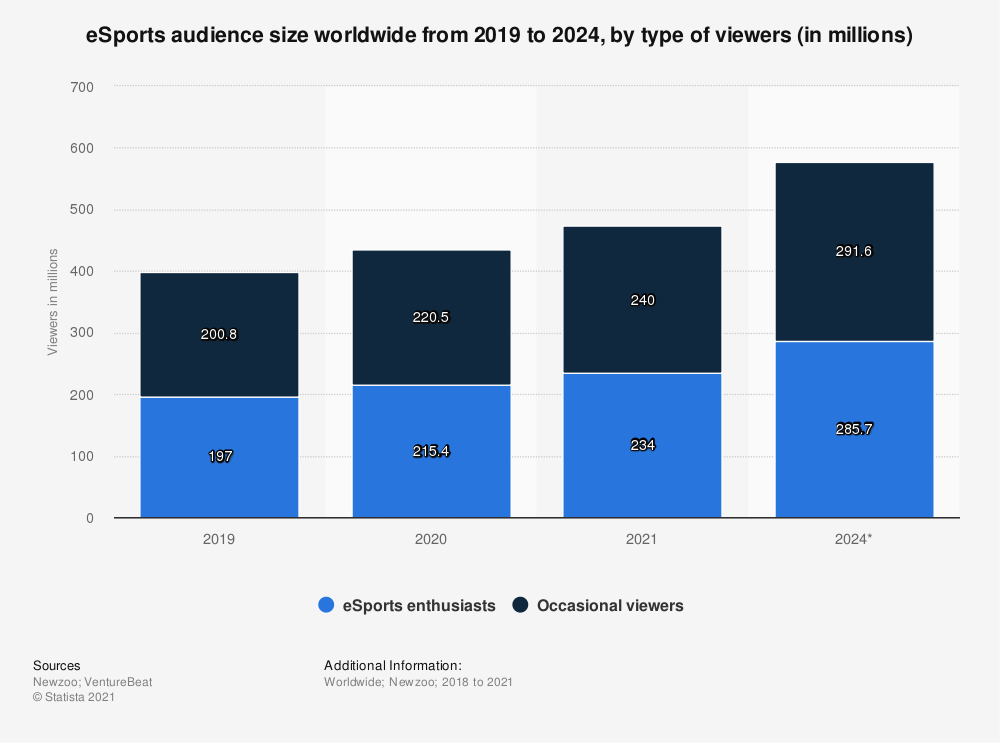 Source: Statista When it comes to mainstream sports, The Olympic Games is a major sporting event that will undoubtedly be mentioned. With the recent hype around the latest games, chances are you’ve seen some of the amazing highlights while scrolling through social media. Watching the world’s best athletes across 33 sports compete for shiny gold medals and national glory is exhilarating for viewers worldwide (roughly 3.5 billion). Now that the 2020 Tokyo Olympics has come to an end, we thought it would be an appropriate time to explore eSports and its potential in the future roster of Olympic sports. In this article, we’ll cover some of the features of eSports that make it comparable with traditional sports and how gamers are becoming recognised as athletes.

The Aspect of Teamwork

The amount of communication that takes place during an eSports match is often overlooked. Just like traditional sports such as Football or Basketball, pro gamers who play team-based games spend countless hours practising with their team to build synergy. To the uninitiated, team communication channels during hectic team fights can often be seen as ‘exaggerated geeky outbursts’ – but seasoned gamers who have experience in competitive play appreciate the teamwork in professional eSports. The never-ending communication in eSports is frequently compared to team huddles in traditional sports. eSports teams even have coaches to draw up strategies for the team to follow! So the next time you hear your neighbour yelling callouts at midnight, leave them be – they’ve got a game to win! 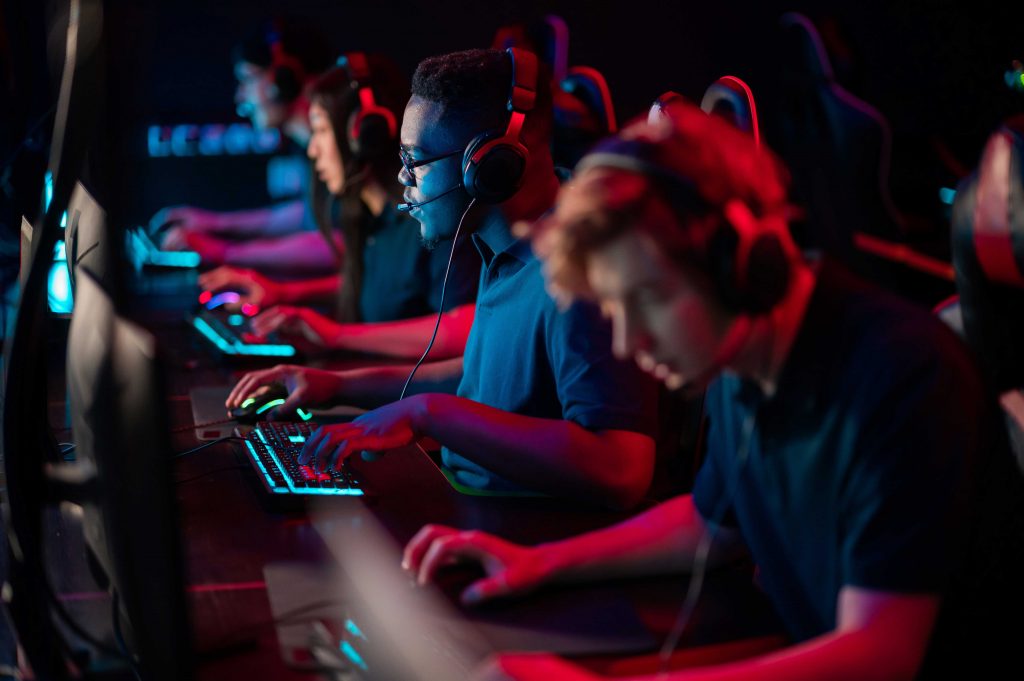 Have you ever watched your favourite Olympic athletes and wondered, ‘how are they so good at what they do?’. Well, there’s no magic formula to success. Olympic athletes are in peak physical shape with the help of a specially crafted workout routine – the very best athletes train almost every single day, perfecting their craft and technique to get the winning edge over their competitors. Michael Phelps, a 28-time medalist at the Olympics, trained for five years straight without taking a single day to rest! Holidays aren’t exactly in his vocabulary, but this relentless work ethic is what earned him the status of being one of the greatest Olympic athletes of all time. 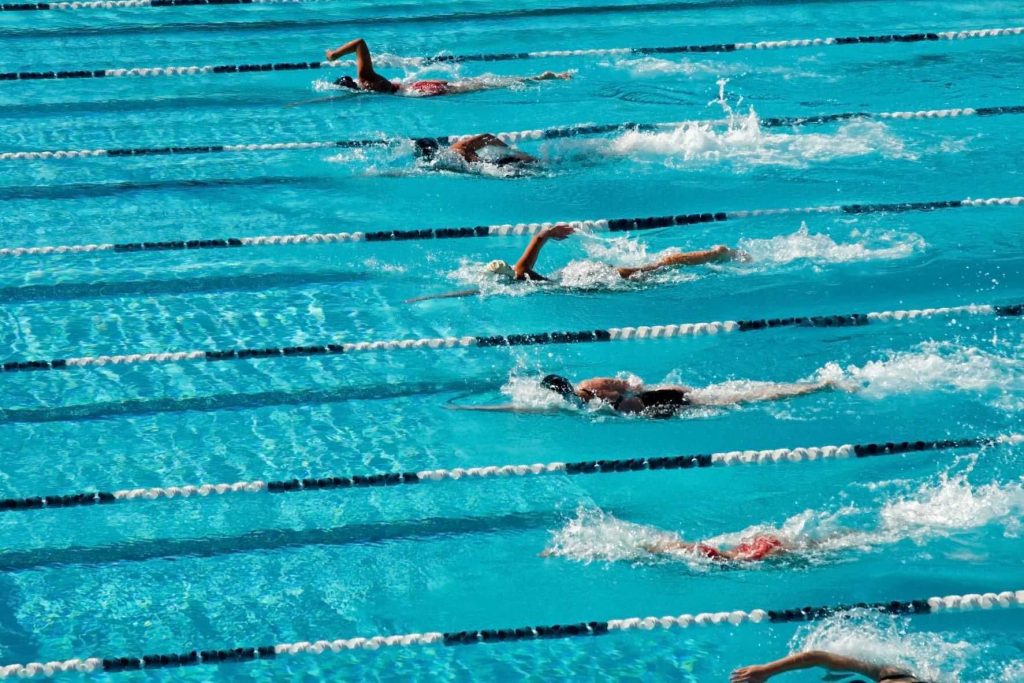 Olympic athletes train relentlessly Similarly, absolute commitment is needed to be among the very best gamers in the world. Success in eSports starts with a strong work ethic, and League of Legends eSports legend Lee “Faker” Sang-hyeok is no stranger to this concept. Faker’s success in eSports is thanks to his intense practice, which can run upwards of 15 hours of playtime per day! All of his amazing plays and memorable moments all boil down to unseen hours of blood, sweat and… mouse clicks. Another well-known example of hard work in eSports is the story of Brandon Leigh, a professional sim racer in the Formula 1 eSports Series. The first champion of the online racing series lost over 20kg in weight while preparing for the 2018-19 season. The physically demanding nature of sim racing required Brandon to be in tip-top shape – he had to stick to a strict exercise and diet regimen to get more fit. With the help of the world-class trainers and nutritionists at Mercedes-AMG Petronas Esports Team, he managed to pull off this amazing feat. The formula for success in eSports and traditional sports is the same: hard work, discipline and dedication.

On the surface, turning your passion for gaming to a profession can seem like a life of ease. What could possibly be better than playing your favourite game all day long? As it turns out, eSports and the pressure that comes with it has a serious impact on e-athletes’ health. A study at the University of Chichester concluded that eSports players in top-tier tournaments face the same levels of stress as professional athletes in traditional sports. The pressure pot that is the world of eSports has even led to researchers recommending that professional eSports athletes attend psychological training sessions. This can explain why so many of eSports brightest stars retire in their late 20s: The pressure and stress is simply overwhelming at high-stake tournaments!  This is similar to the stress that Olympic athletes face. More recently, athletes have been coming forward to discuss issues related to mental well being. The most recent case involved American gymnast Simone Biles as she withdrew from the individual all-around gymnastics competition in the recent Olympics to focus on her mental health. The pressure that comes with representing your country on the highest level can take its toll on even the most accomplished athletes, after all, they’re still human!

The Glory and Recognition

When Joseph Schooling won Singapore’s first ever Olympic gold medal in 2016, Singaporeans celebrated with pride and passion. Promptly after his victory, Joseph Schooling was all over the local media being praised for his competitive spirit and sporting excellence. What made his victory even more impressive was the fact that he beat Michael Phelps (his childhood hero) on his way to winning the gold medal! Joseph Schooling became a household name, with many Singaporeans viewing him as a national sporting hero. Winning at the Olympic Games solidifies an athlete’s legacy and is considered by many to be the crown jewel of sporting success. This works the same way in eSports – only the best players go down in the history books. In the world of competitive Counter-Strike, Oleksandr “s1mple” Kostyliev is one of the greatest players to compete in global tournaments. His impeccable aim and in-game IQ makes him a formidable opponent, and he has seven victories at major global tournaments to back this up. His influence on the Counter-Strike community is undeniable, with players pulling off clutch plays and referring to it as ‘doing a s1mple’. Even after he retires, his legacy will live on through his success and the impact he’s had on the Counter-Strike community. The aspect of glory and how much winning matters in both the Olympics and eSports puts them on the same plane of significance. Winning takes skill, commitment, talent, and most importantly, grit. Beating the best of the best and doing the seemingly impossible is what creates legends. 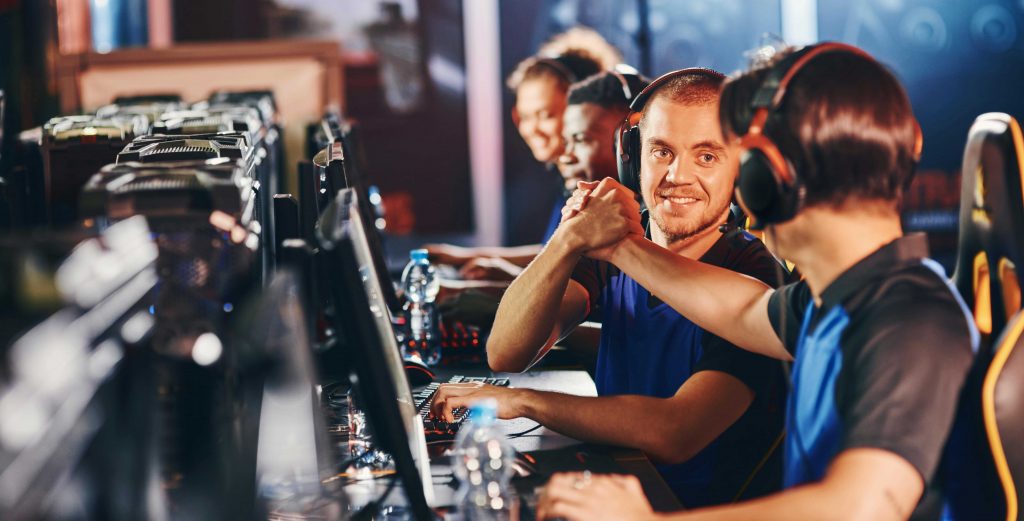 A player’s legacy is heavily dependent on their victory count

eSports in the Olympics?

The hard work and sacrifices that eSports athletes make are being recognised by sports bodies across the globe. While eSports at the main Olympic Games hasn’t happened yet, the Olympic Committee did launch the Olympic Virtual Series in May 2021. This virtual version of the games featured sports such as e-cycling, e-sailing and e-motorsports. While not including some of the most mainstream games on the market, it’s safe to say that the launch of a virtual Olympic Games could be a sign of what’s to come. Could eSports have a spot in the Olympic Games? It’s tough to say. Shooter games such as Valorant or Call of Duty don’t exactly mesh very well with traditional sports – but the creation of the Olympic Virtual series is a great first step. 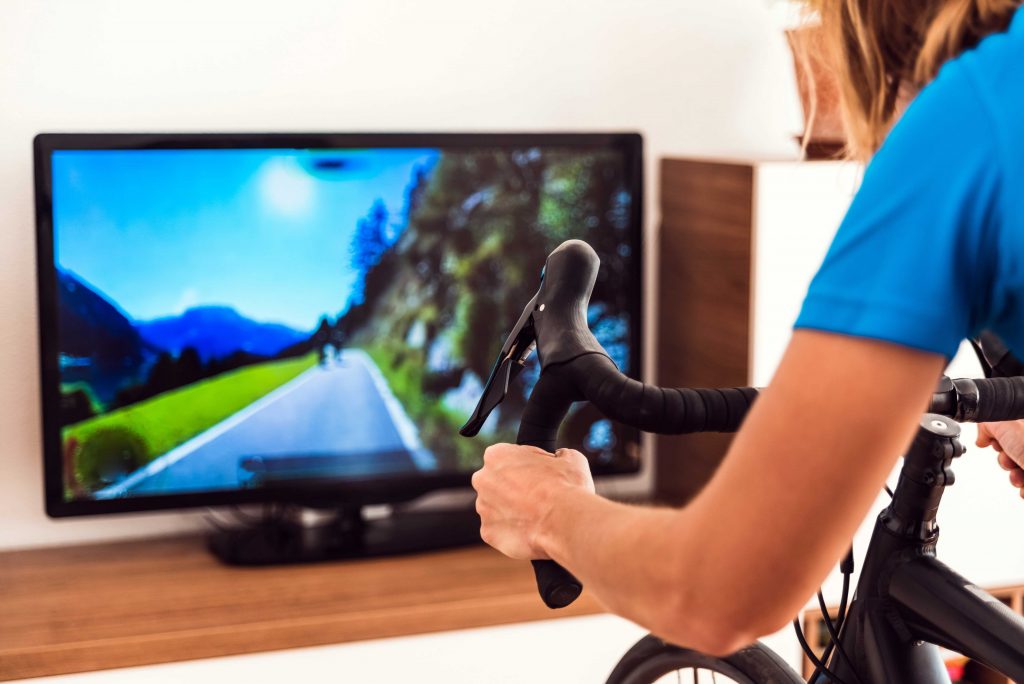 Virtual Sports has become more popular, especially during the pandemic

MyRepublic’s Vision to Level Up eSports

Gaming has always been in our DNA – our mission is to fuel the passion and enthusiasm in Singapore’s gaming scene. Whether you’re a casual gamer who enjoys playing with friends or an aspiring eSports star, we want to make gaming better for you!  Our journey to empower gamers started in 2012 when we launched Singapore’s first gamer-specific broadband plan. This gave avid gamers a dedicated network for gaming and opened the door for more gamer-related initiatives. Today, the line-up of MyRepublic gaming broadband bundles includes lightning-quick gaming routers to give gamers an advantage over the competition. Our selection of dedicated game servers has also expanded across a plethora of titles to help gamers avoid lag when playing the hottest online games. This is made possible by prioritising GAMER network data and setting up the best custom routes to overseas gamer servers. We’re also heavily invested in the future of eSports in Singapore. Throughout the years, the eSports scene in Singapore grew at a remarkably rapid pace. In 2019, we launched our very own eSports tournament GAMER Arena to give gamers a community and platform to showcase their skills. Tournaments for MOBA, sports, and shooter games were hosted in a rotational format, with each season lasting three months. The GAMER Arena experienced its most growth in 2020, amassing over 1.9 million views across streaming platforms. Continuous gaming throughout the year is our idea of fun and what better way to do it than with Singapore’s amazing gaming community! 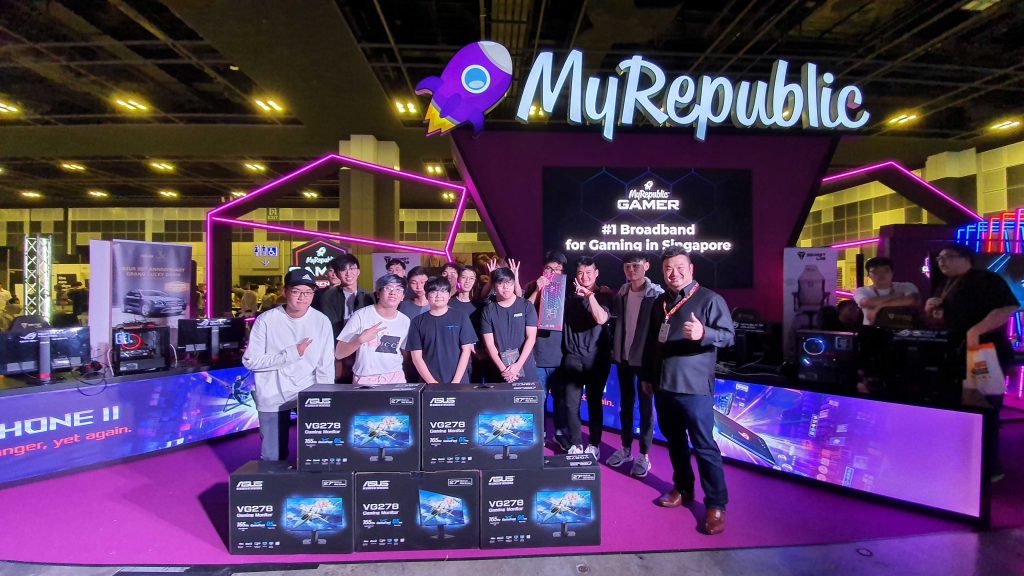 Paving the Path to eSports

To get started, the only main investment apart from time and effort would be getting proper gaming gear. Apart from the importance of having a powerful enough computer to run games well, having high performance equipment such as fast gaming broadband with a strong router can help extract every last ounce of performance. This is especially true when playing online games, where even the slightest fluctuation in latency can cost you an entire game! We know how frustrating lag can get, so we take pride in giving you the best broadband for your gaming needs.  eSports is here to stay, and so are we. With professional gamers becoming more recognised and respected, our goal to support gamers in Singapore remains and we will continue to serve as best as we can to pave the way for the future of gaming. Who knows, maybe you could be the next eSports star to represent Singapore on the global stage! Check out our gamer broadband plans and submit a custom routing request for your favorite games to get gaming today!