Hyper-speed internet up, down and all around

Count me in
Based on analysis by Ookla® of Speedtest Intelligence® data for Q1-Q2 2022. Ookla trademarks used under license and reprinted with permission.
Steam claim based on average download speeds by Steam customers in New Zealand in Nov 2022. Hyperfibre available in selected areas and network only. 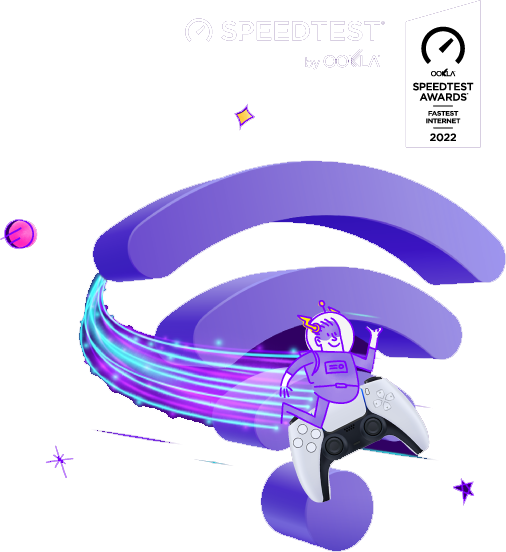 Whether it is for work, home or play MyRepublic is NZ's fastest internet service provider.

*Based on analysis by Ookla® of Speedtest Intelligence® data for Q1-Q2 2022. Ookla trademarks used under license and reprinted with permission. Steam claim based on average download speeds by Steam customers in New Zealand in June 2022. Hyperfibre available in selected areas and network only. Full T&Cs Apply myrepublic.co.nz/legal

Let's check what broadband services are available at your place

Good news! Your address is ready for fibre broadband. We can connect you to all available fibre plans through Chorus. Build My Plan

Fibre is not available

Oh oh Fibre is not available at this address, but check out our VDSL plans.

VDSL gives you the fastest speeds possible until fibre is available. When your home is fibre ready we will automatically upgrade your connection to fibre.

VDSL has a single phone connection. It is important to note that your phone must plug into the modem and your existing phone jack points will no longer work.

Sorry, we can’t provide you with a Broadband service at your address at this time.

Please register your interest and we will contact you as soon as MyRepublic Broadband services are available at your address. Register my interest
Most Popular Hyperfibre

**Speeds shown are national peak time average speeds based on the Commerce Commission’s Measuring Broadband New Zealand (MBNZ) Winter 2022 report. You may experience higher or lower speeds than these. Factors such as the performance of your modem, location of the server you’re connected to, the performance of your device and your in-home WiFi setup can impact the speeds experienced.

Speak to our sales team today to find out which plan is right for you.

Fibre offers a fast and reliable broadband connection, making it the most popular broadband choice for Kiwis. Hyperfibre shifts it to a whole new level.
At home, Hyperfibre’s speed and capacity ensures no matter how much ultra-high definition video, smart appliances, cloud storage, video uploads, advanced gaming, working from home and multiple connected devices you want to have in the household, your broadband connection will be rock solid.
Learn More

No commitment, no problem. MyRepublic’s plans are all month to month with no pesky early termination fees.

High performance WiFi hardware for next to no cost.

Delivering you the best in-home wi-fi experience you can get by giving you the latest and greatest performance routers for a small fee.

Hypefibre is super fast and comes in 2000 Mbps, 4000 Mbps and 8000 Mbps speeds. Hyperfibre enables multiple, simultaneous gigabit downloads, allowing you to stream your heart out.

The rise in ultra-high definition video, cloud storage, video uploads, advanced gaming, working from home, and connected devices in a single household means Hyperfibre’s speed and capacity are more important now than ever. Fibre has always been the best, most-reliable connection, but wait until you experience the era of Hyperfibre.

What are the benefits of Hyperfibre?

1.  Large number of users: Hyperfibre is ideal for households with a large number of users as it provides an internet connection with a higher maximum throughput rate. This means that there is less competition between the connected devices due to the higher bandwidth available. In layman’s terms, Hyperfibre is like if you increase both the speed limit and number of lanes on a motorway. This would effectively increase both the speed and number of cars travelling on it.

2.  Specialist users: If you have the right equipment, Hyperfibre can enable not just higher bandwidth but also higher speeds in excess of 1Gbps! This can be massively useful for specialist users such as Gamers who want an uninterrupted & reliable connection at high speeds. Let’s say you were trying to download a 15GB game. If you have regular fibre internet with speeds of 100Mbps, it’ll take you about 21 minutes to complete the update. With 4Gbps, that same update would take just 30 seconds.

If I’m on Hyperfibre, will the experience be different between Ethernet and Wi-Fi?

Ethernet users will see a huge improvement, particularly if they have multi-gigabit capable devices – such as computers with 2.5Gbps or 10Gbps network cards as these can utilise the higher throughput to a single device.

The main benefit that Wi-Fi users will experience is the higher network capacity that Hyperfibre enables which allows more users to be reliably connected.

What hardware is required to make the most out of Hyperfibre?

For ethernet users, the two main pieces of hardware that you will have to worry about is the router & LAN port of the device you are using.

●  Likewise, the same is true for the network card of your computer. The speed is capped to whatever the network card enables. For example, if a user has an old laptop with a 100Mbps ethernet connection, the speeds will be the same even if they upgrade to a Hyperfibre connection.

However, even for users who don’t have the right hardware, they will experience the increased bandwidth benefits if they have enough users on the network. For example:

Jim has 4 x 1Gbps gaming machines he wants to hook up to a Hyperfibre 4000 connection. Jim would never see any single device surpass ~950Mbps (max rates on a 1Gbps ethernet) but he could have all 4 devices doing these speeds at the same time, without them having to compete for a share of the total bandwidth. The same scenario on a 950/500 connection would only give him about ~235Mbps per device.

Can I just use my ONT as the router?

In Chorus regions, customers can utilise the Nokia Hyperfibre ONT as a router as this will provide a simple dual band (2.5Ghz & 5Ghz) wireless connection, 4 x 1Gbps LAN ethernet ports, and a single 10Gbps ethernet ports with basic configuration options only. Customers can purchase a new router if they want something that will support additional services or run at higher rates.

Does Hyperfibre require any additional installation?

Hyperfibre can use the existing fibre optic cables to your home, but will likely require upgrades to your ONT.

Hyperfibre is available in most Chorus areas that have fibre, though at present the fastest 8000Mbps option is only available in selected suburbs.

How much does the Hyperfibre install cost?

How long does installation take?

A standard residence is typically connected between 5-6 weeks. Timelines can vary based on additional complexities normally related to industry delays, additional work or consent required. Please contact our team to find out more.

Get in touch with us if you still have any questions about getting Hyperfibre for your household.

What are the upfront fees for?
If you choose to rent or purchase a router there will be an upfront fee paid at point of purchase of $14.95 for postage and handling. This fee would not apply if you do not choose a router with your purchase.

All offer summaries can be found here